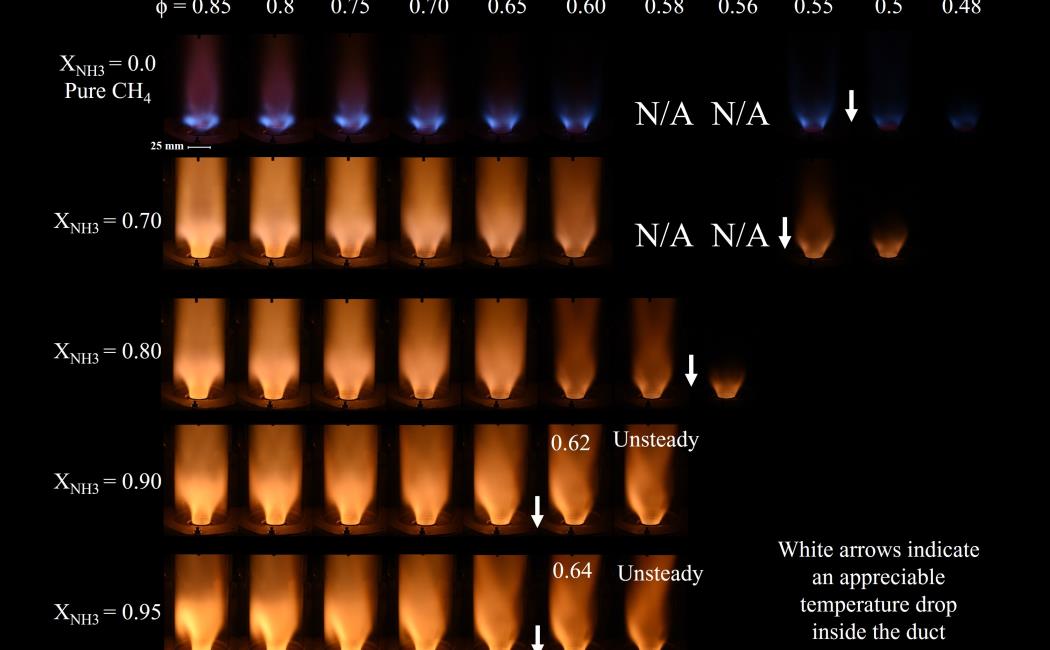 The objective of this work is to realize a micro gas turbine (mGT) operating on ammonia-based fuel mixtures (or pure ammonia) as a demonstration of its potential as fuel to decarbonize the electrical power generation.

However, we cannot immediately use the mGT to test different ammonia fuel blends because it is an expensive device (and we do not want to break it at first), and because the large amounts of fuel we would have to burn due to the high thermal power. Also, ammonia has some drawbacks such as poor combustion characteristics, high NOx emissions and it is toxic and corrosive. That is why we developed a lab-scale solution to test the feasibility of the micro gas turbine running on ammonia fuel blends.

To test the feasibility of the mGT running on ammonia fuel blends, we have designed and manufactured a reduced-scale burner, inspired in the mGT single can combustor. Figure 2 shows and schematic of the burner, which comprises a non-premixed swirl pilot flame, a technically premixed main flame, and a secondary air swirler. It is basically a geometrically scaled-down copy of the actual mGT’s combustor, but for lower powers and with optical access. It was confirmed by CFD simulations that the reduced-scale burner behaves similarly to the full-scale T100 burner. Therefore, whatever we learn from the reduced-scale burner can be applied for comprehensive modifications/actions on the mGT to run on ammonia-based fuel mixtures. 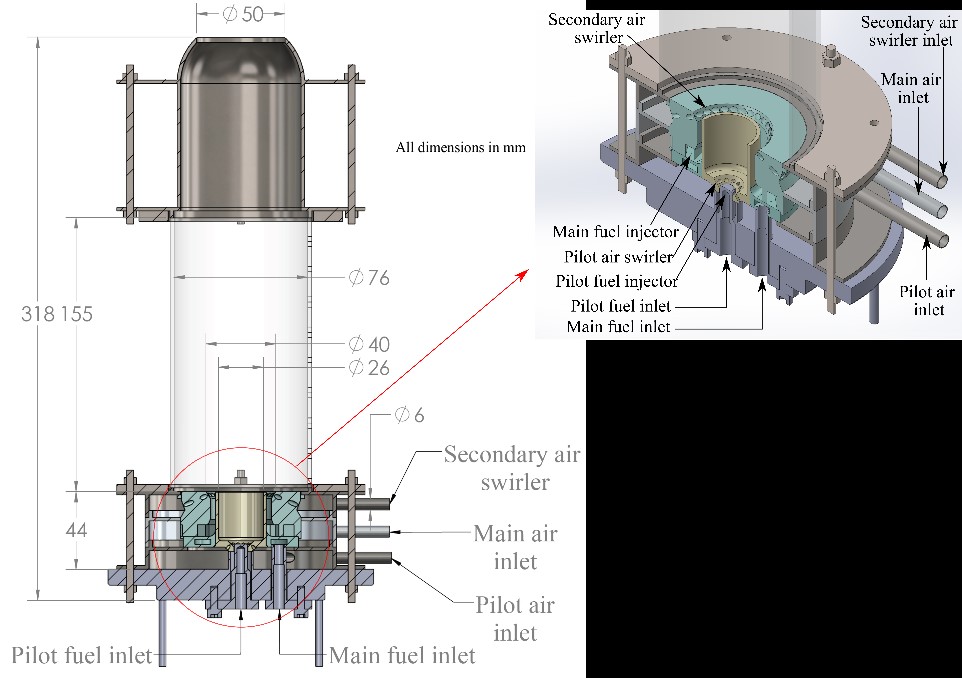 Figure 2. Reduced-scale burner and detailed view of the injectors

We installed the reduced-scale burner into the High Pressure Combustion Duct (HPCD) to increase the ambient pressure up to 4.5 bar, corresponding with the operating pressure of the mGT. Figure 3 presents a schematic of the HPCD, which is a 9-meter-tall stainless-steel tube with an inner diameter of 450 mm and is designed to hold pressures up to 40 bar, and it is well described in previews work [1]

Before any ammonia test on the mGT, we have to check the flame stability running on ammonia-methane fuel mixtures. We recorded natural luminosity flame imaging for pure methane (first row) and for several ammonia-methane fuel mixtures, from 70%ammonia-30%methane (XNH3 = 0.70) up to almost pure ammonia (XNH3 = 0.95). Figure 4 shows time-averaged broadband images of NH3-CH4-air flames and it is observed that NH3-CH4-air swirling flames can be stabilized for high ammonia fractions using this burner. The white arrows represent the equivalence ratio at which the flue gases temperature dropped, which is evidence of a large portion of fuel not being burned, and this condition is marked as the lean stability limit. It can be seen that by increasing the ammonia fraction in the fuel mixture, the lean stability limit is reduced to a richer equivalence ratios. 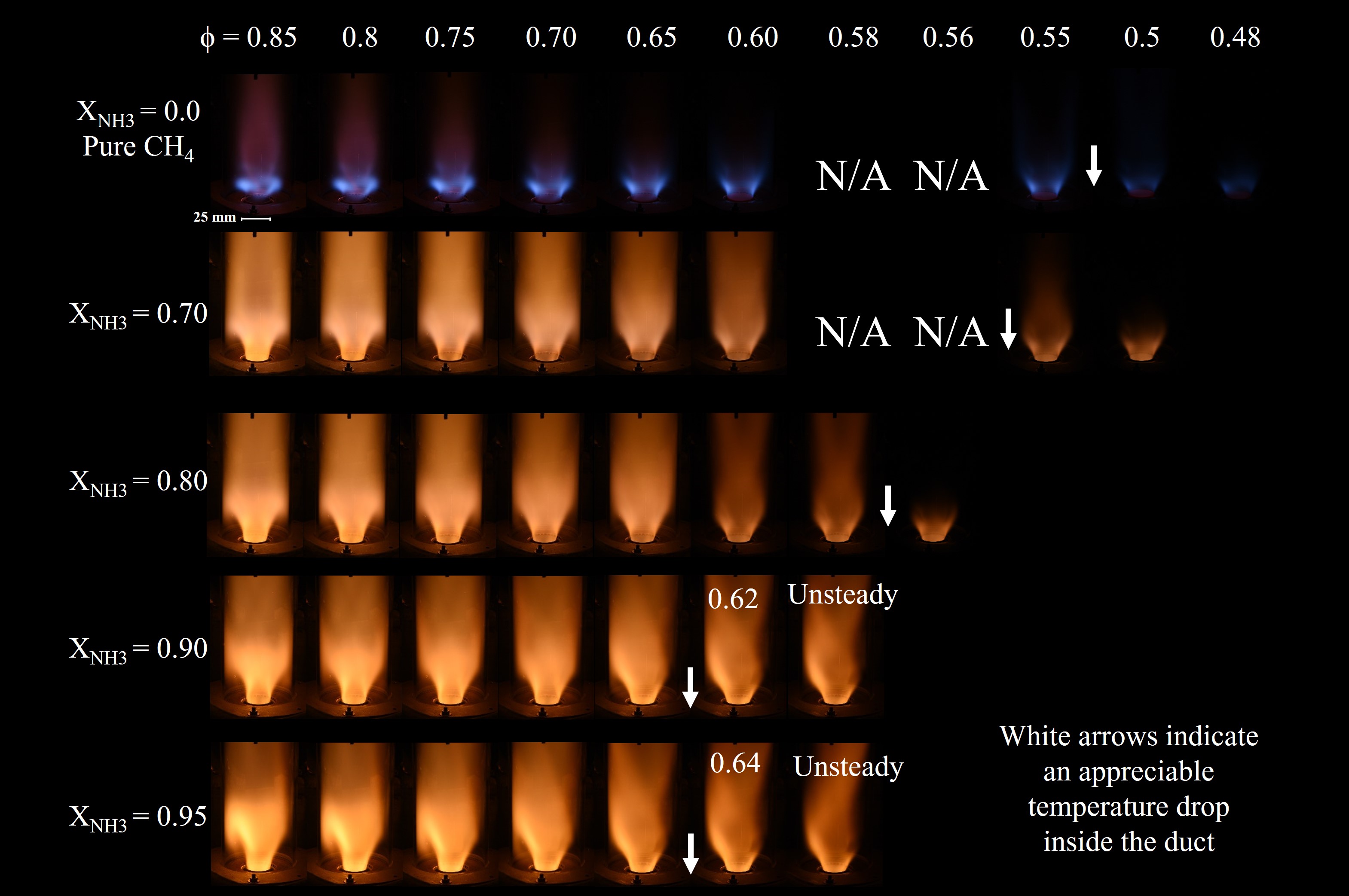 The measured equivalence ratio at lean blowout is summarized in Fig.5. The dashed horizontal red line represents the lean stability limit for pure CH4. As explained before, the equivalence ratio at lean blowout increases by increasing the ammonia fraction for the flame images. In other words, the NH3-CH4-air flames are more prone to lean blowout than CH4-air flames in the reduced-scale burner. However, the fuel mixture with XNH3 =0.7 shows a lean performance close to the pure CH4 and can be a candidate for the mGT operation on ammonia-based fuel mixtures.

Figure 6. Measured NO and N2O emissions of NH3–CH4–air flames as a function of lean equivalence ratio for different ammonia fractions

NO and N2O emissions were recorded since ammonia flames produce high NOx emission concentrations. Figure 6 shows the NO and N2O concentration in ppmv at a 15%O2 basis. It can be observed that the NO emissions decrease by decreasing the equivalence ratio. However, no low-NO condition that fulfills any environmental regulation was found. Nevertheless, the NH3-CH4-air flame with XNH3 = 0.7 at an equivalence ratio of ϕ = 0.55 presented the lowest NO concentration recorded, of about 400 ppmv at 15%O2 basis and almost negligible N2O emission.

This fuel mixture at the mentioned conditions is a candidate for the mGT operation based on the stability limits, and the NOx emissions presented. A Selective Catalytic Reduction system (SCR) will be needed for NOx environmental regulation compliance.