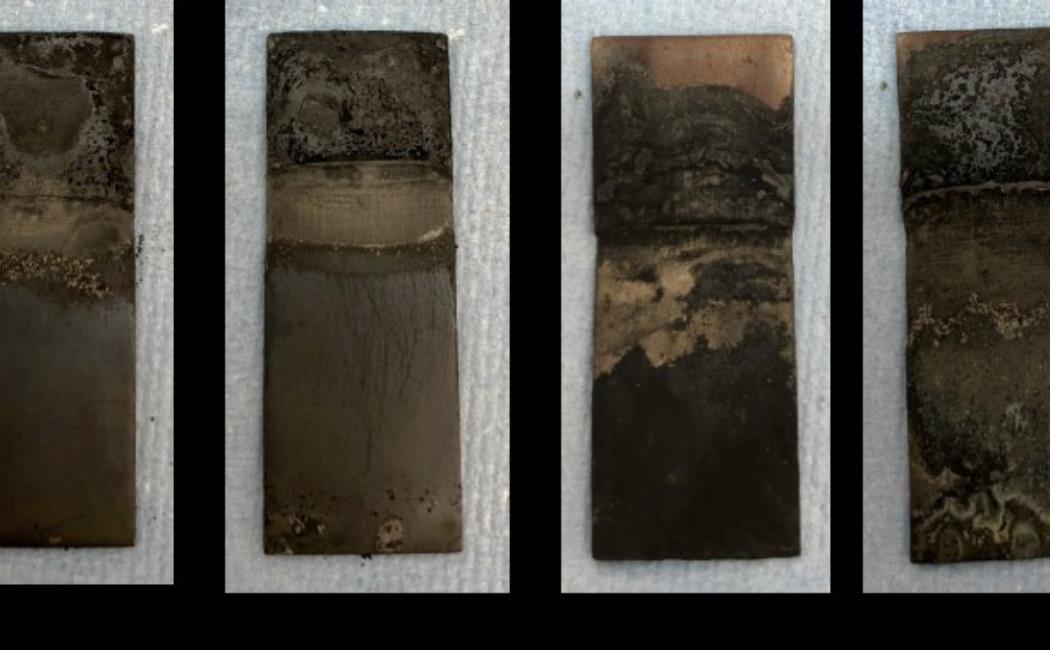 The studies conducted at the corrosion laboratory are focused on three main areas:

The work conducted in these three areas aim to develop a fundamental understanding regarding the behavior of current and future materials utilized in the energy field when exposed to real-world varying conditions. The main objective of areas one and two is to explore the corrosion effect of commonly used conventional fuels (i.e., Arabian Extra Light) and identify how altering their chemical composition changes the corrosion rate of the current, in-use structural materials. Likewise, the third area aim at identifying how a future fuel, namely ammonia, used in the cracking process to produce hydrogen, impacts these same in-use materials along with more complex high-alloyed materials.

Q1 – How do current materials react under conventional fuel environments, with and without altered fuel chemistry?

Q2 – How do these same materials react under a future fuel environment?

Q4 – How do the materials of choice impact the current infrastructure of energy? (i.e., Can the current units handle the new future of fuels? Which metals will work better? What is the cost?).

Heavy Fuel Oil (HFO) is an extremely attractive fuel to use for fuel generation in Saudi Arabia. However, including the production of NOx and SOx, HFO contains trace metals such as vanadium, nickel, lead, sulfur, chlorine, etc. These trace metals pose additional problems such as low melting points, hot end corrosion, and fouling. Once HFO is burned in the combustion chamber, oil ash is carried by the flue gases throughout the boiler process. The sodium content allows these particles to form sintered deposits and bonding on the material surface. This causes more ash to bind to already deposited ash and more tubing surface material. This compounding effect of ash buildup not only causes operational inefficiencies such as a reduction in heat transfer or plugging and fouling, but can also lead to material issues, such as pitting, wall thinning, and potentially failure.

Similarly, when vanadium is burned in the HFO, it reacts with the oxygen to form V2O3, V2O4 and the most unstable, vanadium pentoxide, V2O5. While the other compounds are refractory, the melting temperature of V2O5 is relatively low. With a melting temperature of about 690°C, this compound melts below most operating temperatures that superheater tubes experience. In its liquid form, V2O5 forms a molten salt layer on metals and accelerates corrosion by dissolving oxide layers. These ash deposits are formed by compounds with a low melting point. With additions of Na, S, and Cl in the flue gas, it further reduces the melting temperature, where accelerated corrosion is more likely to occur by dissolving protective oxide layers, leading to catastrophic corrosion.

Taking this into account, this study examined the effect of altered fuel impurity content, namely vanadium and sodium, on the corrosion rates of different material. Fuels with altered chemistry were prepared in order to asses three different compositions, as shown in Table 1.

Table 1. Selected elements of interest taken from ICP-OES analysis of AXL used in both (a) non-doped AXL, (b) V-Na doped AXL and (c) V doped AXL. 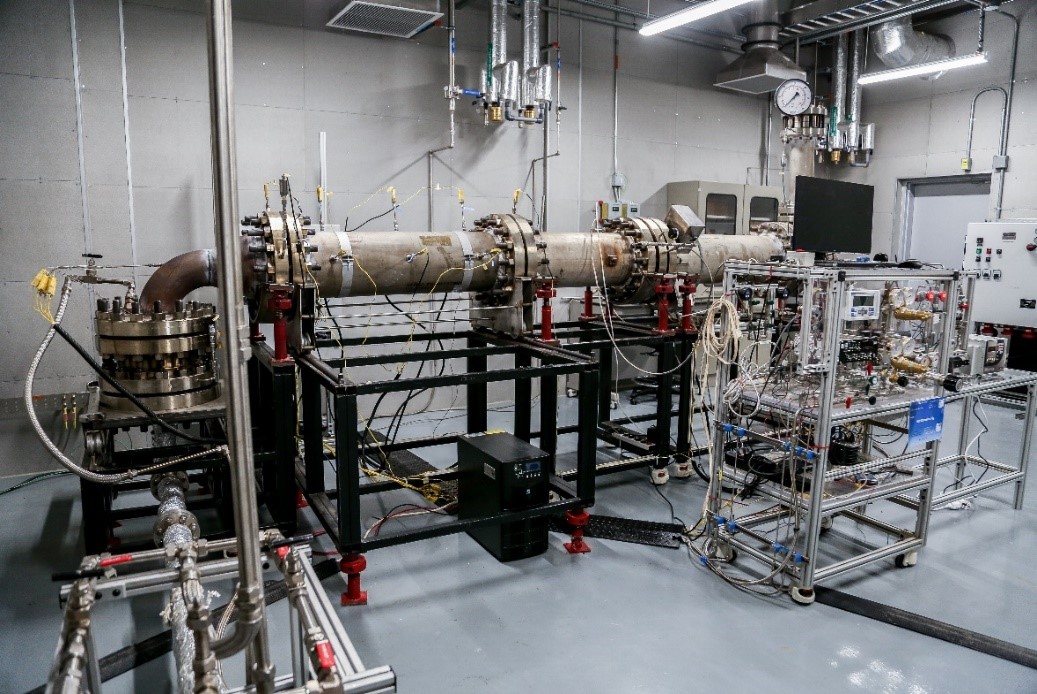 Fig.1. Photograph of the corrosion rig used in the liquid fuel related studies.

The results derived from these experiments aided in establishing a corrosion rate map for the materials involved and laying out an empirical framework to rank the life of boiler tube materials, including SA 213 T12, SA 213 T22, SA 213 T91, and Inconel 600, under different operating conditions, including vanadium to sulfur levels and vanadium to sodium ratios. Fig. 2 shows the metal coupons before and after being exposed to the corrosive environment. 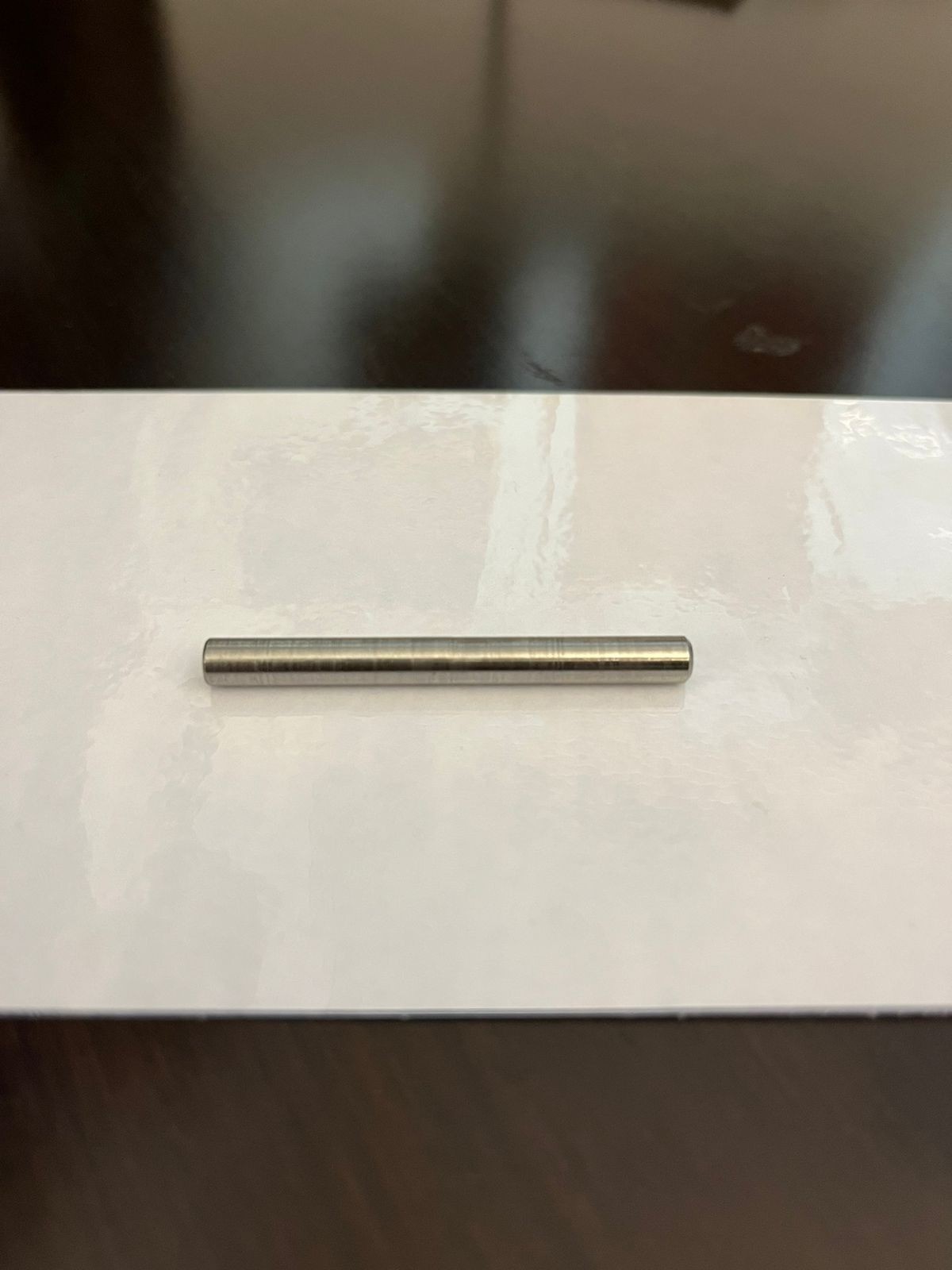 Fig.2. Metal coupons before and after

When a high sulfur-containing fuel, such as HFO or Arabian Extra Light (AXL), is burned, a significant amount of SO2 is produced in the combustion process, which then turns to SO3 due to the presence of oxygen in the flue gases. This conversion is typically assumed to range between 3–7%. This SO3 then reacts with the water vapor present in the combustion gases to form sulfuric acid vapor. If the metal surface temperature falls below the acid dew point, ADP, the sulfuric acid vapor condenses on the metal tubing. The condensed acid corrodes the metal tubing and forms an oxide, or rust, layer that easily flakes off and results in further issues such as material loss and an increase in downstream deposits. This process of the formation of sulfuric acid in the exhaust gases condensing on the material surface is commonly called cold corrosion.

Based on the above, cold corrosion studies in our laboratory have been focused on understanding the interaction between material (specimens of Corten steel) and electrolyte (dilute mixtures of sulfuric acid) at differing phases of the electrolyte, namely the vapor and liquidous phases to help elucidate the phase interface interaction. This assists in facilitating and further the knowledge regarding the corrosive behavior exposure to fully liquid, gaseous, or the liquid-vapor interface the electrolyte has on material integrity for industrial use. Fig.3 shows some of the metals samples after being exposed to the corrosive environment. 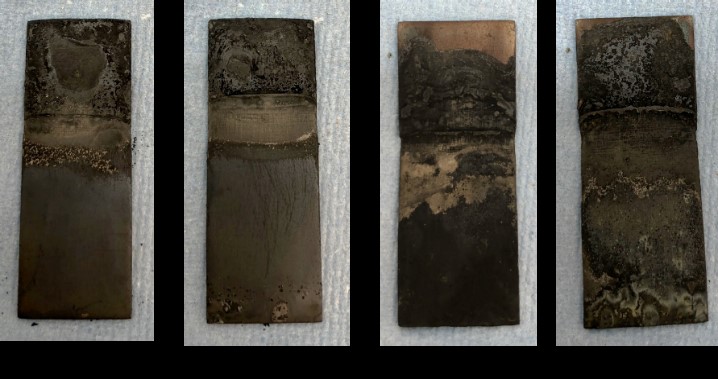 Publications derived from this study

Nitridation is phenomena driven by the available nascent nitrogen provided from the reaction of cracking ammonia. This release of atomic nitrogen increases the activity and diffusivity at the surface and into a material. Ammonia nitridation (AN) and Hydrogen embrittlement (HE) may occur due to the dissolution and permeation of nitrogen and hydrogen atoms, respectively by interacting with various lattice defects such as dislocations and grain boundaries. This degrades the mechanical properties of metallic materials including a loss of ductility (Ductile-Brittle Transition) and tensile strength, stress corrosion cracking (SCC) which ultimately leads to cracks initiation, propagation, and behavior.

At low temperatures, this interaction has been shown to create several forms of nitrides that assist in hardening the surface of a material. However, at higher temperatures, well above 500°C, the common nitridation mechanism is far less understood although has demonstrated a loss in material integrity.

This project (currently in progress), supported by Air Products, aims at furthering the understanding of the nitridation behavior under extreme conditions, high pressure and high temperature, while interacting with several varying materials of interest, both structural metals and high Ni-alloys. Through this testing, the understanding of high temperature nitridation should be increased in order to provide a baseline for reliability of processing units, decision making, and material performance.